“The idea that some lives matter less is the root of all that is wrong with the world.” —Paul Farmer

This past week, the world received the sad news of the loss of Dr. Paul Farmer, age 62, of an apparent cardiac event while working in Rwanda. I suspect many of you know who he was, but the facts of his life are so remarkable they bear revisiting.

One of six children born to a schoolteacher father and a grocery cashier mother who wanted their children to grow up outside of “middle-class expectations,” Paul spent a decade of his early life in Florida, at times living with his family in an old school bus and a boat moored in a bayou. Paul’s early promise resulted in him winning admittance to Duke University. During that time, he went on a volunteer mission to Haiti. This changed the course of his life. During his years attending medical school and earning a Ph.D. in anthropology at Harvard, he traveled back and forth to Haiti, founding a rural clinic there. A book written about him in 2003 by Tracy Kidder, called Mountains Beyond Mountains: The Quest of Dr. Paul Farmer, a Man Who Would Cure the World (a wonderful book, which I highly recommend), chronicles his work in rural Haiti. Over time, his organization Partners in Health (“Zanmi Lasante” in Creole), founded 15 clinics and hospitals serving over 1.5 million Haitians. Next, Partners in Health expanded into Africa, Central Asia, and Latin America. He remained a Harvard professor and was chair of the Department of Global Health and Social Medicine as well as Chief of Global Health Equity at the Brigham and Women’s Hospital in Boston. Despite these lofty titles, he continued to spend at least half of his time providing care directly in the countries served by Partners in Health.

Soon after the Kidder book was released, I heard Dr. Farmer speak at a national conference. His energy and passion filled the large ballroom. He arrived disheveled, having just deplaned after an overnight flight from Africa. With no evidence of fatigue, he enthusiastically described his work, shared stories illustrating the challenges and rewards of providing care in under-resourced locations, and showed photographs of both the beauty and the extreme poverty found in Haiti. His presentation was so powerful it compelled me, and I’m sure many in the room, to want to join him in his quest for health equity in the world’s poorest regions.

Some years later, in 2013, I had the opportunity to spend some time working in Haiti. The photo below shows me (second from left) in the “cage truck,” which we used to safely transport our team (on that day, myself, a nurse, and two medical students) and supplies to rural clinics. The second photo shows us setting up for the day in an old shipping container divided into two exam rooms and a small pharmacy, where we saw patients by headlamp. The patient history (gleaned from our Haitian interpreters) and a physical exam were the tools with which we had to diagnose; a pharmacy stocked with some basics comprised our sole tool for treatment. Most of our patients survived on about $1 per day in income, and most were unable to eat more than basic meals of bread and plantains, and often only every other day. Poorly constructed dwellings perched on hillsides, without access to electricity or clean water, were the norm. Many still lived in tent cities, three years after the 2010 earthquake that devastated the region. 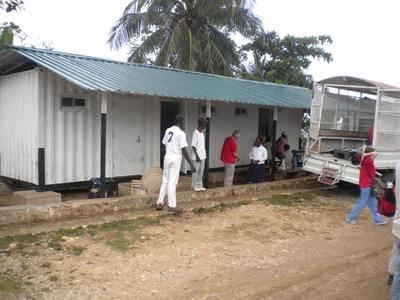 During my time there, I experienced for myself what Dr. Farmer meant when he said “Clean water and health care and school and tin roofs and cement floor, all of these things should constitute a set of basics that people must have as birthrights.” Although the organization I was working with had done an admirable job of creating a series of well-run and funded continuity clinics, I couldn’t help but think that, without access to the basics such as clean water and electricity, it would be difficult for medical care to make a difference. It was easy to feel overwhelmed. But, as Dr. Farmer said, “You can’t allow yourself to be overwhelmed for long because that’s going to leave you ineffective.” It seemed to me that focusing on each patient, and what difference I could make, such as providing antibiotics for an infection, along with my compassion, was what I had to give—and had value despite all that I couldn’t do.

Dr. Farmer’s work shows us that we can aspire for more. He proved to the world that the highest quality medical care can be delivered in the poorest parts of the world, if only there is the will. His work will continue. Due in part to his example, there continues to be a large interest in global health by current and future generations of medical students and residents. Here at BSOM, we have an active Global Health Scholars program and the Global Health Initiative. Under the direction of Dr. Kate Conway, our students have had transformative experiences in global health, both around the world and locally in our own region. More information about these programs can be found at our Global Health Scholars web page.

And, let’s not forget that global health includes the health of our own communities. Health disparities exist right here in the Miami Valley. As our region’s medical school, we are committed to work toward improving the quality of care in our region and in Ohio. In Dr. Farmer’s words: “Equity is the only acceptable goal.”

Let’s honor Dr. Farmer’s vision by working toward health equity in our region and around the globe.