Because March is Women’s History Month, I thought it would be fitting to dedicate this month’s blog entry to exploring the history of women in medicine and reviewing the current state of women in academic medicine.

The history of women in American medicine begins with a Southwest Ohio connection. Most of us know that the first woman in America to receive a medical degree was Elizabeth Blackwell, but many may not know that she spent her formative years in Cincinnati! I discovered this fact while exploring the downtown area last fall, where I snapped the below photograph.

Dr. Blackwell was inspired to pursue medicine by a dying friend who said her ordeal would have been better if she had a female physician. At that time, no medical schools admitted women. She persisted, and attended the only one who would accept her—Geneva College in rural New York. Although she experienced discrimination by both classmates and professors who forced her to sit separately and excluded her from labs, she eventually won their respect, graduating first in her class in 1849—a true pioneer. 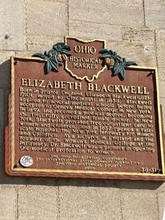 In 1850, the first medical college solely for women, called the Female Medical College, opened in Philadelphia.  At the first commencement, one of the school’s founders, Dr. Joseph S. Longshore, said to the eight graduates, “This day forms an eventful epoch in the history of your lives, in the history of woman, in the history of the race.” Ann Preston, a member of this first group, would become the first woman dean of any medical school in 1866.  Still, progress for the rest of the 19th century would remain slow. By 1900, women made up just 5.5% of the physician workforce, and remarkably, this number remained flat in the first half of the 20th century.  It was not until the 1960s that women’s presence in medical schools began to increase significantly. By 1974, 22.4% of matriculates to US medical schools were women, and by the end of the 20th century, that number had risen to 45.6%.

Yet, the journey for the advancement of women in medicine does not end with admission to medical school, and there is much work to do.  Although 41% of faculty at US medical schools are women, only 25% of full professors are women, and only 18% of department chairs are women.  A lesser percentage of medical school deans are women (currently 16%; kudos to BSOM, who to my knowledge is the first US medical school--other than the early all-women’s schools-- to have three consecutive women deans). On average, women are offered less in starting salary and other forms of compensation despite equal effort, rank, training and experience. There is unevenness in authorship of peer-reviewed publications, research funding, and editorial boards, and in honors, awards, and speaking invitations.

How are things at BSOM? Of our department chairs, only three of 14 are women. Among our dean’s ranks, there are many more women, so overall, women are well represented in leadership of the school. Among students, we currently have more women than men, a trend that tracks nationally. Among residents and faculty, things are more uneven, particularly in certain specialties and departments.

If we wish to make gains in gender equity, raising consciousness about the issue is the place to start. We should strive for equity in recruitment and promotion. In order to do this, we must examine our own implicit biases, and not make assumptions about career plans or goals based on gender. Women must have equal opportunities for achievement and advancement. Our department chairs can make sure that mentorship and sponsorship for women is a priority. Of course, environmental climate can make a big difference – did you know that women are more likely to be introduced by their first names than by their titles? In addition, women are more likely to be interrupted in meetings, or to have their contributions to the discussion ignored (this has been documented even when the woman is a Supreme Court judge!). Finally, we must make sure that there are not gender inequities in pay at BSOM.

By creating opportunities for all, we can best serve BSOM’s most treasured mission—creating the physician workforce that our society needs.