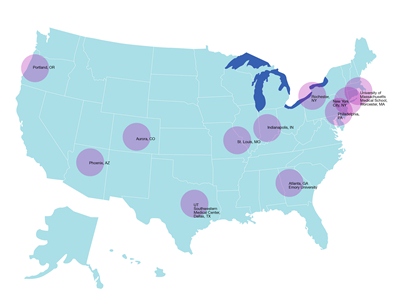 To accelerate the response to emerging drug abuse trends, this recently awarded, NIH-funded study (9/15/14 – 9/14/15) is designed to establish iN3, an innovative NIDA National Early Warning System Network that will rapidly identify, evaluate, and disseminate information on emerging drug use patterns.  Two synergistic data streams will be used to identify emerging patterns of drug use. The first data stream will be derived from the Toxicology Investigators Consortium (“ToxIC”), a network of medical toxicologists who specialize in recognizing and confirming sentinel events involving psychoactive substances. ToxIC investigators are located at 42 sites across the U.S, and of these, we have selected 11 to serve as sentinel surveillance sites. See Fig. 1. The research team will analyze reports from ToxIC investigators’ assessments of patients with acute, subacute, and chronic effects of emerging drug use. The second involves measures of drug use derived from social media (Twitter feeds and web forums).

Data from semi-automated content analysis will be disseminated among ToxIC investigators to identify patterns related to emerging psychoactive drug use. Conversely, information from ToxIC investigators’ bedside interviews will improve the analytical precision of the Semantic Web platform.

The Specific Aims of the study are to:  1) Identify new episodes of emerging drug use in multiple community-level indicators; and 2) Disseminate information about occurrence, identity, clinical, and adverse effects of emerging drug use. iN3 will have a public health impact by providing a tool that can inform efforts to truncate and potentially prevent outbreaks of emerging drug use as well as inform research needs and policy.