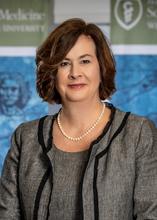 Valerie Weber, M.D., M.S., FACP, is the eighth dean of the Wright State University Boonshoft School of Medicine (BSOM).  Prior to joining BSOM in 2020, she served as the Senior Vice Dean for Educational Affairs at the Drexel University College of Medicine, Philadelphia, Pennsylvania. During her six years at Drexel, she led the implementation of a new MD curriculum, “Foundations and Frontiers,” and developed multiple new regional medical campuses, including a four-year regional campus at Tower Health, in Reading, Pennsylvania.

Prior to joining Drexel in 2014, Dr. Weber served as founding chair of the Department of Clinical Sciences, associate dean for clinical affairs, and professor of medicine at The Commonwealth Medical College, now the Geisinger Commonwealth School of Medicine (GCSOM), in Scranton, Pennsylvania. As a member of the senior leadership team of GCSOM, Dr. Weber had a major role in many aspects of the development of the new school, which awarded its first medical degrees in May 2013. She oversaw the creation of the school's innovative clinical curriculum, a highlight of which is a third-year longitudinal integrated clerkship, developing medical school faculty across a 16-county region and establishing academic affiliations with nearly 30 hospitals. Before joining GCSOM, Dr. Weber was the division chief of general internal medicine and geriatrics with Geisinger Health System, located in Danville, Pennsylvania. Geisinger serves patients in central, south-central and northeastern Pennsylvania, and southern New Jersey. While at Geisinger, she led implementations of the advanced medical home model and led multiple other system performance improvement and patient safety initiatives.

Dr. Weber is certified by the American Board of Internal Medicine and is a Fellow of the American College of Physicians. Her awards and honors include the University of Pennsylvania Community Service Award, the PhillyBiz Best of Healthcare Innovator award and the Dayton Business Journal’s “Bizwomen Power 50 List.” She is a member of the Phi Beta Kappa and Alpha Omega Alpha honor societies. Her scholarly interests include medical education innovations and change management and leadership in health care. Recent publications include, “Broadening Diversity in Medicine: Outcomes of the Drexel Pathway to Medical School Postbaccalaureate Medical Science Program” for the Journal of Best Practices in Health Professions Diversity, and “First into the lifeboats: protecting medical student education during the Hahnemann University Hospital closure” which appeared in Academic Medicine. She has served as President of the Association of Chiefs and Leaders in General Internal Medicine and on the executive board of the Society of General Internal Medicine. She currently serves on the administrative board for the Council of Deans of the Association of American Medical Colleges.

Dr. Weber completed her internship and residency in medicine at The Graduate Hospital in Philadelphia, where she also served as chief resident. She earned her doctor of medicine degree from the University of Pennsylvania School of Medicine, an M.S. in health care management from the Harvard School of Public Health, and her B.A. in psychology from Washington and Jefferson College. She completed the Coaching Leader’s certificate program in Executive Coaching in 2019, and is certified by the International Coaching Federation.

Boonshoft School of Medicine Dean Valerie Weber, M.D., M.S., FACP was named to the Bizwomen Power 50 List by Dayton Business Journal in September 2021. That list is selected by the DBJ’s editorial team and includes an elite group of local female executives who have made a significant impact in their Dayton-area communities.