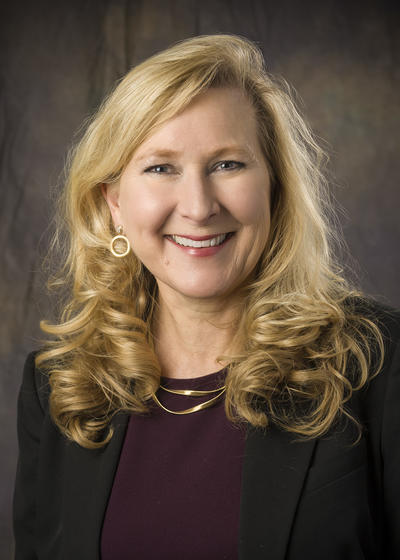 Growing up in Elkhorn, Nebraska, Brenda Roman, M.D., associate dean for medical education, dreamed of working in a job that would let her express her creative skills. But after receiving high math and science scores on the ACT exam, Roman’s high school guidance counselor encouraged her to consider a career in medicine.

“I originally wanted to be an art teacher as I loved being creative,” Roman said. “But the more I explored medicine through volunteering at a hospital, the more I felt that it would be a ‘good fit’ in serving people.”

No one in Roman’s family had worked in medicine before, and so her journey began with no example to follow. She had hope, however, and stuck to it. A few short years later, Roman found herself in medical school at the University of Nebraska.

In the 1980s, the medical school curriculum was all lecture-based. The learning style was unappealing to Roman and, for a time, she considered leaving school. The exam process was grueling and, by today’s standards, decidedly ancient.

“I was pretty bored and discouraged by the rote memorization of the first two years of school and, in fact, considered quitting after my first set of exams,” Roman said. “Our exams all took place once a month on a Saturday morning, called ‘conjoint exams,’ as we first took the biochemistry exam for an hour, then anatomy, then physiology, then histology, etc. Having four to five different exams all on the same day was simply exhausting.”

She did well on the exams, except for the one she tried to cram for—biochemistry—which she “bombed” and decided to adjust how she studied so that her medical school experience would be more engaging. It was fitting with advice Roman had been given — never quit on a bad day.

Far more engaging than the exams were Roman’s clinical rotations. She found that she truly enjoyed rotating in family medicine at a rural hospital in Nebraska.

“The 30-bed hospital housed me in an apartment in its basement, so I was the first person who got called to the emergency room — the family physician lived just a couple blocks from the hospital — and I was able to first assist in surgeries, etc., as I had already had the core rotations in medical school,” Roman said. “It was fantastic. More than anything, that solidified my emerging professional identity as a physician.”

The primary care rotation was close in spirit to pediatrics, Roman’s top specialty choice when she was an entering medical student. She had also felt herself drawn to internal medicine during her third year, which is how she wound up pursuing psychiatry.

Though she hadn’t considered the specialty, and it was her least favorite clinical rotation, a psychiatry consult team was working closely with her care team during a sub-internship in internal medicine. The contributions made by the consult team opened her eyes to the work psychiatrists do every day.

“Psychiatry was the last specialty I ever thought about doing, mainly because I didn't know anything about the field,” Roman said. “The psychiatry consult team was very involved with a patient who really touched my heart, and I found myself fascinated by their recommendations for this patient and his family.”

Quite conflicted about the specialty to pursue, she applied to internal medicine programs, psychiatry programs, and those combining the two. Roman was still undecided when she submitted her ranking list. The psychiatry residency at the University of Cincinnati was at the top, and an internal medicine program was next. Roman was selected for her first choice, and ended up loving it.

In addition to her current role as associate dean for medical education, Roman serves as professor of psychiatry. It’s a position that suits her interests perfectly.

“I love the variety of administrative tasks, working with faculty to best serve the educational mission for our students, and still teaching,” Roman said. “I have a drawer in my office of all of the thank-you notes over the years that I have received from students and patients. When I am having a bad day, I often will look at some of them. I still write letters the old-fashioned way, and am trying to write a thank-you note to someone once a week.”

When she isn’t working, Roman spends time with family. She enjoys going for walks with her Siberian husky, Toby. She loves snow skiing, cooking and baking and reads historical fiction.

In the spring and summer, Roman plants flowers, and does a lot of weeding. During the colder months, she enjoys taking trips to exotic locations, in addition to a week of skiing in the mountains of Colorado.

“My favorite place is the beach of Kiawah Island in South Carolina,” Roman said. “My husband and I are making travel a higher priority in the empty-nest phase of our lives, and had a fabulous trip to Galapagos Islands and Peru last summer.”

When her sons still lived at home, Roman remembers showing up to their cross-country meets and tennis tournaments in her work attire. She loved being “room mother” and decorating cakes for special occasions.  She did her best to make time for family, while keeping up with her professional duties, and was grateful for the support she had in working part time for about 10 years to be with her kids. Roman has never really liked the concept of work-life balance, as it implies that something is wrong if there isn’t perfect balance.

There were times during her career when she was ultra-focused on work, especially if there were pressing deadlines, but family was always the top priority. Roman is still working to say no to various requests and make more time for herself, and get out her oil paints to start painting again.

“As I have told students, ‘You can have it all. You just can't have it all, all of the time.’ Be open to learning and have an attitude of gratitude, especially when things are tough,” Roman said. “I have been at the Boonshoft School of Medicine my entire academic career and feel very fortunate to have a variety of mentors here and across the nation who have supported me in my career. This is a special place."