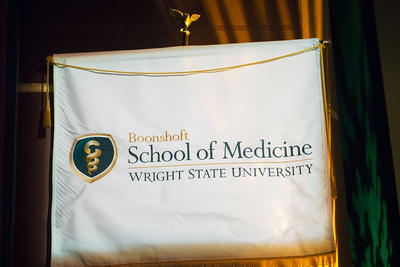 We are proud of our alumni and graduates of our residency programs and want to spread the word about your achievements. If you have professional news or personal updates to share – or simply want to stay in touch – please contact the Office of Advancement at som_adv@wright.edu or 937.245.7634.

*John McCafferty, M.D., surgery, passed away in the December of 2019. McCafferty was a a retired US Air Force Colonel who served on active duty as a surgeon for 32 years, including multiple overseas deployments. He was one of the first Critical Care Transport Team surgeons. He saved many lives during operation Enduring Freedom in Afghanistan, and received several military decorations. He was also a Fellow of the American College of Surgeons.

Anthony Hesketh, M.D., surgery, is now a member of the surgical team at Surgery Associates of York Hospital in York, Maine.

Christen DeAnne Johnson, M.D., M.P.H., family medicine, was recognized as a Wright State University Alumni Association Graduate of the Last Decade, during the alumni achievement awards held on campus in October of 2019.