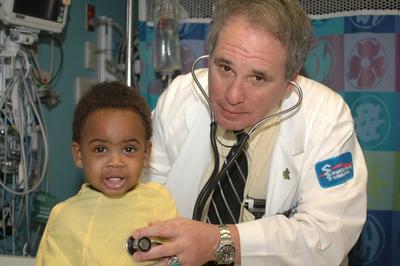 A cardiologist by training, Arthur Pickoff, M.D., is an ardent supporter of those working in primary care. While serving as chair of the Department of Pediatrics at Wright State University Boonshoft School of Medicine from 1998 to 2014, he worked shifts at Dayton Children’s Hospital and regularly encouraged his students to pursue their passions.

In retirement, he is building on his commitment to primary care by establishing a scholarship fund to support students interested in pediatrics and related areas of primary care: the Arthur S. Pickoff, M.D., Scholarship Fund.

“I personally became aware of a number of students who had a passion for pediatrics but felt that they could not enter the field as a primary care physician because of the high level of debt they were carrying through college and medical school,” Pickoff said. “They gravitated toward higher-paying specialties in order to better handle their debt.”

Pickoff believes that reducing the debt load will make it more likely that these students will pursue specialties in primary care. His convictions are backed up by the research of prominent John Hopkins University pediatrician Barbara Starfield, M.D., M.P.H., who advocated for the importance of primary care during her life.

In communities where primary care was strong, Starfield’s studies showed, health disparities were reduced, health of the community was improved, and costs were lower. As someone who has championed pediatrics in the Dayton area for decades, it seemed like a reasonable way for Pickoff to make a difference.

“There’s no question that if we reduce debt, more students will feel comfortable financially to pursue careers in primary care,” Pickoff said. “Pediatrics, Internal Medicine, and Family Medicine are the big three.”

The scholarship will target those students who are interested in pediatrics and also those who have demonstrated a strong history of commitment to health and the well-being of children. It’s a bit of a broad stroke, as Pickoff doesn’t want to exclude those who might not pursue primary care or pediatrics until later in medical school.

“Some of these students don’t make that decision until after their clerkships in year three. Many students in year one and year two don’t know what they want to go into,” Pickoff said. “We want to seek out those students in the early years who are inclined to pediatrics or who have demonstrated an intense commitment to health and well-being of children and give them some support.”

The effort also reflects Pickoff’s passions, dating back to when he first applied for a job at the medical school. He was attracted to the position as chair of pediatrics because he believes that primary care is an important part of a comprehensive health care system.

“With this conviction and understanding, I came to Wright State,” Pickoff said. “Let me say that I am a specialist, a cardiologist, but one that recognizes the absolute importance of primary care.”

Providing support for those interested in pediatrics also could help in recruiting students. Knowing that there is support for their interest in pediatrics, potential applicants to the Boonshoft School of Medicine may be encouraged to choose it over other medical schools.

There is also the potential that the scholarship could have an impact well outside of Dayton. Graduates from the Boonshoft School of Medicine match in outstanding residency programs across the country every year.

Pickoff started the scholarship fund through a personal donation and has watched it grow through numerous gifts from former residents of the Wright State-Wright Patterson Integrated Residency Training Program. It also has received more than $25,000 in donations from a number of leaders at the medical school, including the current pediatrics Chair John Duby, M.D., and Dean Margaret Dunn, M.D., M.B.A., FACS.

“The bottom line here, the critical issue, is that students with high debt tend to gravitate toward subspecialties, often not even within pediatrics, because of the higher reimbursement,” Pickoff said. “We’re trying to mitigate that issue.”