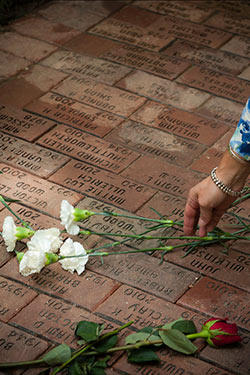 First called the Donated Body Program when it began in 1975, the Anatomical Gift Program at the Wright State University Boonshoft School of Medicine has seen a lot of growth in the intervening decades. All of them are marked by gratitude for the selfless gifts of those who have donated to the program.

The program was established two years after the medical school was founded. Its first director, and the first registered donor, was Antonio Zappala, M.D., Ph.D. He was the founding chair of the Department of Anatomy at the medical school.

In 1976, Kettering Medical Center Hospital transferred donors to the Wright State University School of Medicine from a program it used to run. The charter class of 31 medical students also started taking classes that year.

“They stopped their donation process, and it moved over to Wright State,” said Rodney Guthrie, director of the Anatomical Gift Program. “Wright State had a program that absorbed the Kettering hospital program. This type of program has always been good for the community.”

In 1977, Frank Nagy III, Ph.D., was appointed director of the program. He served as director until 1982, when Joseph Zambernard, Ph.D., became director. In 1994, when the program was renamed, Nagy was again appointed director and served in that role until his retirement from Wright State University. As director for such a long period of time, Nagy oversaw much of the development within the Anatomical Gift Program. For his service, he received the Presidential Award for Faculty Excellence in Professional Service from the university.

In 1980, Rockafield Cemetery was developed to provide a serene resting place for donors. It was the same year that the charter class graduated. In addition, Wright State University became the first medical school in Ohio to hold a memorial service to honor donors to its Anatomical Gift Program. About 1,200 family members and friends attend the services each year. Medical professionals enthusiastically participate in the service as a way of publicly expressing their gratitude to the families of donors.

The service serves as an opportunity for the students to share their feelings with family members. Guthrie asks them to be truthful and to speak from the heart. The former and current students share how the program has affected them and how it will impact their future careers.

“We're developing friendships and relationships with donors, especially their families,” Guthrie said. “A great sense of pride comes from the privilege of having our lives touched by the thousands of anatomical donors who have blessed us with their incredibly generous gifts.”

The program very commonly collaborates with other health professions programs throughout the Midwestern United States and the state of Ohio, including those at Cedarville University, Cleveland State University, University of Dayton, University of Findlay, and Kettering College of Medical Arts, among others.

It makes a lot of sense, because setting up the Anatomical Gift Program took a lot of time and effort. The program has existing staff, infrastructure, and databases that would be difficult to start from scratch.

“I think our growth will continue. I’m really glad the community has supported this program the way that it does,” Guthrie said. “I would say we’re very blessed to have this many people who want to come to Wright State.”

Medical students and residents, as well as nursing students at Wright State University and other health care professionals, are fortunate to have such robust support. Not every medical school in the state of Ohio offers a program like this. Some rely on three-dimensional virtual reality to teach their students anatomy. Thus, they miss out on the advanced knowledge offered through hands-on training.

Part of the support owes itself to the fact that the medical school was started as a community-based medical school. The Boonshoft School of Medicine was made possible through donations from prominent community members and partnerships with local hospitals, as well as support from the Dayton area.

“Our students are out in the hospitals. They’re meeting patients, and their patients are talking to family members. Many donations come through them,” Guthrie said. “People see the students doing rounds and residencies. Our medical students are a very good face for us in the community.”

Today, the program continues achieving its mission. Guthrie thinks the program will continue to thrive. “We've always felt that if an individual is gracious enough to gift their remains to Wright State, we should honor that and do what we can,” Guthrie said.