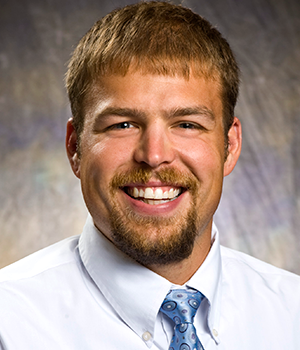 As an undergraduate majoring in environmental geology, Brian Merrill was studying fossils of tiny, prehistoric creatures called graptolites when he had a revelation – not about graptolites, but about himself.

“I just didn’t want to spend the rest of my life in a lab,” he said. “I wanted to be around people.”

That realization led Dr. Merrill on a path that took him first to medical school, then to the field of psychiatry and now to the front lines of the war on opioid addiction.

Dr. Merrill, 37, is a 2011 Boonshoft School of Medicine residency graduate who now serves as an assistant professor of psychiatry at Boonshoft. He is also assistant medical director at Dayton’s new OneFifteen, described by its leaders as “a non-profit ecosystem dedicated to the full and sustained recovery of people living with addiction.” It’s a joint project of Premier Health, the Kettering Health Network and Verily, a subsidiary of Google owner Alphabet Inc.

OneFifteen, named in recognition of the 115 people who died daily in 2017 from opioid overdoses in the United States, is being developed in Dayton’s Carillon neighborhood. It includes a remodeled former tool and die shop at 257 Hopeland Street and leased space in Kindred Hospital, 707 S. Edwin C. Moses Blvd. It began seeing patients last October.

Dr. Merrill is involved in clinical care at OneFifteen’s outpatient clinic, and administrative work to open a 24-hour crisis stabilization unit in February 2020 and a 58-bed dormitory-style recovery unit this summer. OneFifteen also has a 32-bed acute care unit. Dr. Merrill said there will be a “diverse payer mix” including private insurance and Medicaid.

OneFifteen has ambitious goals. Not only will it have “a full range of clinical services on one campus,” Dr. Merrill said, but officials there plan to put technology to greater use in the fight against addiction.

There’s plenty of empirical evidence about the risk factors that lead to many physical maladies and how they can best be treated, he noted, but “we don’t have that level of understanding in psychiatry.” It’s a field “underserved by technology,” using “archaic medical records.”

At OneFifteen, “we aim to collect, organize and activate data that has already been collected as a routine part of clinical care to answer the big questions that face addiction,” Dr. Merrill said. “How long should a patient be on medication for opioid use disorder? What kind of psychosocial intervention is most likely to help this person with addiction? These are questions that the medical community does not have evidence-based answers for, and (it) would benefit society greatly if we could figure it out.”

In addition to his work at OneFifteen, Dr. Merrill also treats people with addictions at Dayton’s MonDay Community Correctional Institution, where eligible non-violent offenders get treatment in lieu of prison incarceration.

He also holds an M.B.A. from Wright State University. He has served on the Alcohol, Drug Addiction and Mental Health Services Board of Montgomery County.

Dr. Merrill juggles his addiction work while teaching residents as an assistant professor and raising three small children. “I try to be present when I am home, not distracted by my phone or laptop. I have three small children at home who need and deserve a ton of attention, so this balance is important.”

Born in Columbus, Dr. Merrill has been a resident of Kettering, Ohio, since he was 2 years old. He met his wife, Molly, when they both attended Kettering’s Fairmont High School, where she now teaches. The Merrills’ children are ages 7, 5 and 4.

For Dr. Merrill, a career in medicine “was an opportunity to work closely with people, but in a way that satisfied my interest in science.” He said a rewarding stint as a college student working at a camp for developmentally disabled children was a factor in his decision to leave lab life behind and apply for medical school. “This experience, working with the kids and their families, was very important in propelling me toward a career in medicine.”

He had planned to focus on internal medicine or pediatrics, but changed his mind in his third year at Boonshoft when his first clinical rotation was in psychiatry.

The scientist in him was fascinated by “the changes in the brain that make it possible for a patient to experience a delusion, hallucination, mania or depression.” Dr. Merrill’s compassionate nature was struck by the human toll of severe mental illness.

He was particularly touched by the case of a bright, promising young woman who was slipping into psychosis. Diagnosed with schizophrenia, she grew paranoid and delusional, suffered from hallucinations and sometimes didn’t recognize her treatment team. “The burden of schizophrenia on a patient and their family is devastating,” he said, “and trying to help seemed like such a worthy use of my energy.”

Dr. Merrill joined the Boonshoft faculty following graduation from his child and adolescent psychiatry fellowship in 2016. He expects to be doing more teaching here.

What’s his advice for med students?

“I would encourage students to realize that they could probably be happy in a number of medical specialties,” Merrill said. “That the life they want exists for them in several different forms ­– as an internist, pediatrician, pathologist, psychiatrist, dermatologist or whatever.”

“Our passions are something we develop and hone over time, not always something that grabs us,” he said. “I know that a lot of colleagues in medical school describe these ‘light bulb’ moments when they realized what specialty they wanted to pursue, but many others experience ambivalence about selecting a specialty, and they take this uncertainty as weakness or evidence that they are not totally committed to their choice. Selecting a specialty is a huge decision and it is totally normal to doubt that process a bit.”