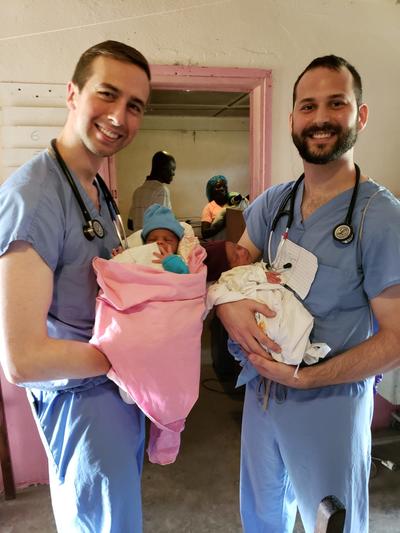 While on a medical service trip to the Congo, three Wright State University Boonshoft School of Medicine students helped a mother deliver twin boys. Because of their help, the mother honored two of the students by naming the baby boys after them.

All three felt led to help people in the Congo. Dr. Seabold was there for two months, while Drs. Fisher and Speranza were there for one. They each learned how to practice medicine in a developing country, and all that entails. The medicines available for treating patients are different, for example, and machines and other common tools in the U.S. simply aren’t available there.

“I went from treating blood pressure and diabetes to malaria and tuberculosis. This required quick learning on the job of how these things present and how to treat them. I also had to communicate primarily with an interpreter and, when he wasn't there, with what little Lingala and French I knew,” Seabold said. “This was also the truest sub-internship I had experienced at that point in medical school. I had true responsibility for my patients, writing orders, making decisions, all under the oversight of my attending physician. It stretched me and grew me and prepared me for residency.”

Dr. Speranza felt the same sense of challenge, and he loved every minute. He calls working at Pioneer Christian Hospital the single best experience he had in medical school. The hospital is located in Impfondo, in the northern part of the Congo, and has 60 beds. Speranza learned a lot as a student clinician and grew personally through the experience.

“We were given quite a bit of autonomy with appropriate oversight. It was the first time I had to be OK with seeing the consequences of my actions with patients,” Speranza said. “I learned a lot about tropical medicine and saw diseases there that I will probably never see in the U.S. Treating cerebral malaria and tetanus became commonplace. We all grew a lot as clinicians during those weeks.”

Dr. Fisher learned how to manage several patients simultaneously. He experienced working at the understaffed hospital, which meant he and the others essentially worked as senior residents. They ran the hospital and checked out patients under supervision from the head doctor, Joseph Harvey, M.D., medical director.

“It was not all roses. I think we had seven or eight kids die during my month there. Luckily, my experiences as a paramedic and running cardiac arrests came in very helpful,” Fisher said. “There was a time when I told the others I didn’t think I could mentally handle getting out of bed to go assist the staff with another dying child, as we had a run of days with children dying every night.”

There were children who passed away from tetanus, malnutrition, and AIDS. Several died from malaria, and a few died from hypoglycemia because the country ran out of glucose. The physicians commonly treated trauma wounds and sexually transmitted infections.

There were incredible challenges with ensuring safe childbirth in the Congo. All three, including an attending physician, worked through the conditions to deliver the twins. After Dr. Seabold completed an ultrasound, she discovered that there were two babies in the womb lying sideways. As they couldn’t come out in that position and the mother was already in labor, the family and attending physician decided to do a c-section.

“We were alternating cases, so it happened to be my turn to do the c-section with Dr. Harvey. I acted as the primary surgeon while Dr. Harvey was my first assistant and talked me through the entire procedure and assisted me throughout the most critical and difficult steps,” Seabold said. “Dr. Tyrel and Dr. Frank assisted with anesthesia and as a scrub, passing the instruments and assisting with suturing, respectively.” 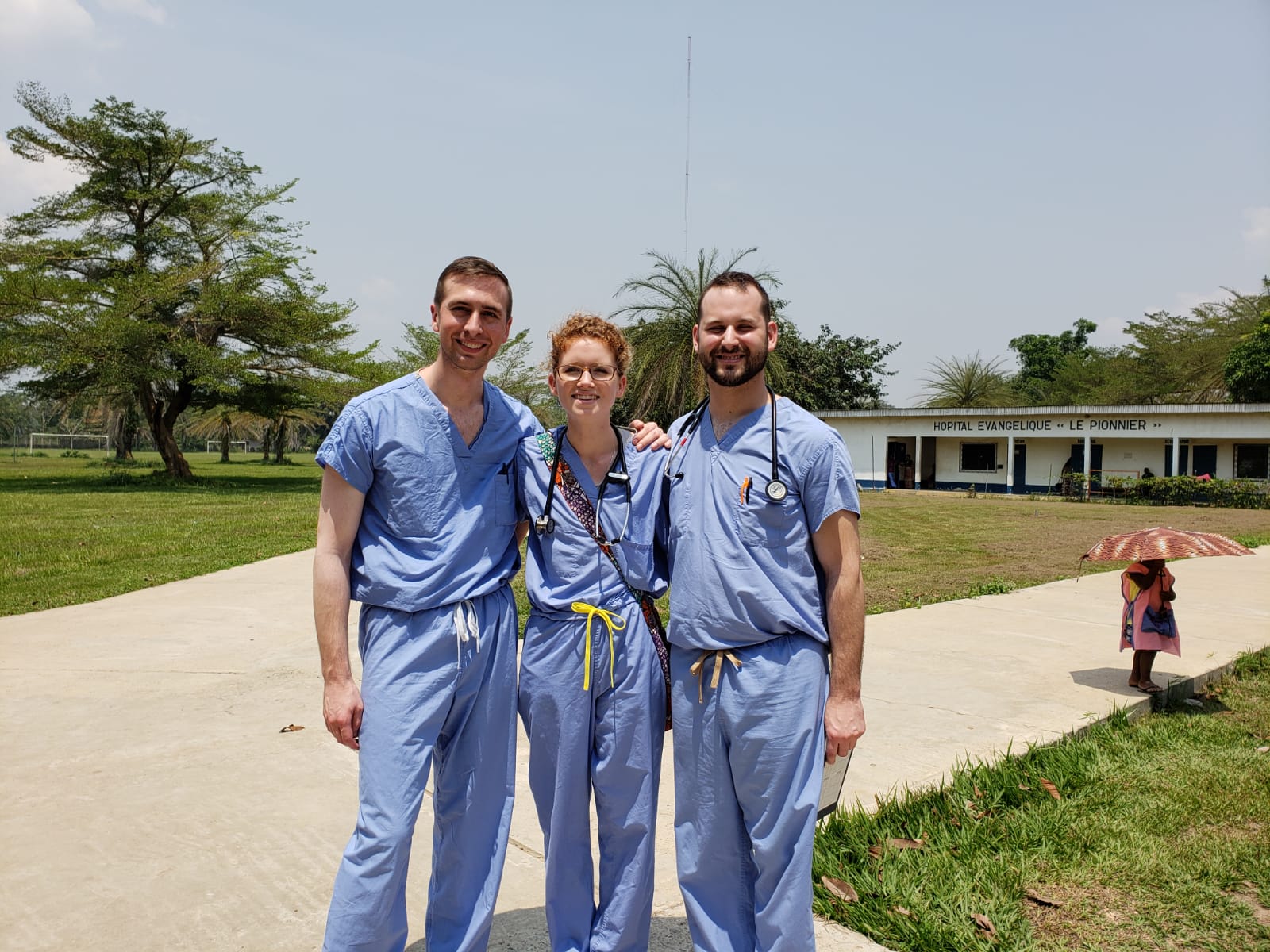 The scrub is in charge of keeping all of the instruments in order, gowning and gloving the rest of the surgical team, and handing instruments to the surgeon. Speranza had never served in that role before and it helped him have a respect for those who work as surgical scrubs in day-to-day life. He found that it takes a lot of focus on what is happening and preparing for what the surgeon will need next. He also helped Seabold close the mother’s abdomen and skin.

The team was happy to deliver two healthy twin boys. The following day, they checked on the mother and the babies and the head nurse suggested that the boys be named after Tyrel and Frank. The mother was happy to do it.

“Prior to Frank and I arriving, Erica assisted in delivering a set of triplets, and she had one of them named after her,” Fisher said. “So all three of us left the Congo with a baby named after us.”