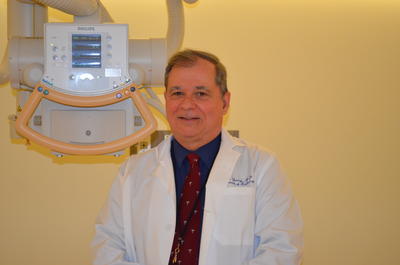 Those who practice family medicine know that there are always new findings to learn. The field’s knowledge is so expansive that some are intimidated by the requirements of continuing education. This fact, in addition to the feeling that he couldn’t be an expert in all aspects of family practice, was enough to move Eric Young, M.D., ’94, to consider shifting to another specialty, but not before having a few adventures along the way.

After graduating from medical school at Wright State University and completing a family practice residency at St. Elizabeth Medical Center in 1997, Young joined a solo family medicine physician in Pocatello, Idaho. Just more than a year later, he rejoined the United States Air Force to work as a flight surgeon.

He was initially assigned to Peterson Air Force Base in Colorado Springs, Colorado, where he served as chief of Aerospace Medicine. In 2000, Young was transferred to Elmendorf Air Force Base in Alaska. It was not long thereafter that he was sent to work in warzones overseas.

After several deployments where he was the clinic commander, Young decided to either leave the military due to frequent and likely future deployments away from his family or ask to go into a radiology residency at Travis Air Force Base in California.

The breadth of knowledge in family practice was also incredibly vast, and Young wondered where he might better concentrate his focus. He realized that he would have to narrow his practice or retrain. As a military physician, he knew that he could retrain into another field of medicine without experiencing a significant decrease in income or loss of retirement years, and so he chose radiology.

“Doing a family practice residency at St. Elizabeth Medical Center allowed me the opportunity to interact with the medical center’s radiology department. I remember one radiologist who had a general medicine practice before retraining into radiology,” Young said. “I thought it was interesting, to say the least, that not only could he describe the radiology findings but also mention what disease it likely was and treatment options.”

In 2003, he entered radiology residency at Travis Air Force Base and completed the training in 2007. Young was then transferred to Mountain Home Air Force Base in Idaho as chief radiologist, where he practiced the full scope of general radiology for four years.

As he was nearing retirement from the Air Force, Young was considering his next move after a fulfilling career of military service. He realized that going into fellowship training was a common and likely necessary transition.

“I retired on a Friday in late March 2011 and started fellowship training at the University of Washington in Seattle the next Monday,” Young said.

Still, Young looks back fondly on his time working in primary care. Having that background was extremely valuable both in his work as a radiologist and as a person.

“I try never to lose my primary care perspective as it applies to treating the patient,” Young said. “I understand the background and stress primary care providers face and can best tailor the radiology study to answer their questions.”

The only potential negative that he faces as a radiologist is decreased patient and peer contact. In his last two positions, he served as a solo radiologist. In his current role at the Veterans Affairs hospital in Anchorage, Alaska, he compensates for this deficiency by providing radiology lectures to primary care staff, as well as at a family medicine residency program in the city.

Young wouldn’t do anything differently. His journey has taken him around the world and from specialty to specialty. And the foundation that family medicine gave him has helped in so many ways.

He remembers John Gillen, M.D., a former chair of the Department of Family Medicine, who Young believes was the epitome of a family medicine physician. Anthony Foley, M.D., also had an impact on Young’s trajectory. Foley was his residency training director while Young worked at St. Elizabeth Medical Center.

Leaving the Air Force has let Young pursue some of his other interests. He enjoys riding horses, driving convertible sportscars, and sailing his 35-foot Hallberg-Rassy ketch sailboat. He plans to spend several years sailing the Pacific Ocean to explore numerous island nations. Young and his wife, Linda, have one son, three daughters, and their first grandchild, who was born on December 9, 2018.

“Just this year, I have volunteered to read radiology studies for a hospital in Africa as part of Samaritan’s Purse World Medical Mission and will be going there as their in-house radiologist for two weeks in April 2019,” Young said. “In the not too distant future, I will semi-retire, perform medical missions, and travel and enjoy life.”