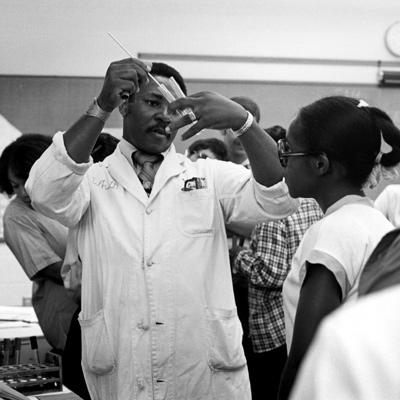 As transformational leaders like Martin Luther King Jr. have taught us, hope is perhaps one of the greatest gifts. It has no expiration date and no limits. It transcends time and space, the person who gave it, and even the one receiving it. Hope has an infectious quality and — instilled in the hearts of others — it has the audacity to persist.

For 40 years, the Horizons in Medicine program at the Wright State University Boonshoft School of Medicine has supported the dreams of countless disadvantaged and underrepresented high school students from the Dayton area. It has shown them that careers in medicine were possible. It has encouraged them and given them a voice and a community of peers they can rely on in the future.

Dedicated community members founded the program around the same time the Boonshoft School of Medicine began accepting its first students. They included the late Robert Davis, D.D.S., a prominent dentist, and Edythe Lewis, the first African-American radio host in Dayton and a former Dayton city commissioner. Gideon Adegbile, M.D., has served as a clinical professor since the program’s very beginning. Cheryl Robinson, M.D., one of the medical school’s first alumni, was another early volunteer. There also was Robert Lee and Allen Pope, who was director of minority affairs and financial aid. The late John Beljan, M.D., was dean of the medical school at the time the program began.

Horizons in Medicine’s reach is impossible to measure, but its alumni have personally experienced the transformation it made possible. Alonzo Patterson, M.D., a pediatrician at PriMed Physicians in Dayton, Ohio, credits the program with opening his eyes to the world of medicine. He was one of the first to go through Horizons in Medicine in 1979, the year of its first class.

“It was probably my earliest exposure to what higher education requires as far as learning goes. With my family’s background, I hadn’t been around a bunch of folks who had been to college,” Patterson said. “So, for me, it was one of my first exposures to what learning after high school would require of me and whether it was possible.”

Ten years later, after completing undergraduate education at Wright State University, Patterson was crossing the stage at graduation from the University of Cincinnati School of Medicine. Getting there was a journey that began with Horizons.

Some of the program’s features include receiving instruction from students at the Boonshoft School of Medicine, demonstrations of anatomy and discussions of medical science, and the opportunity to shadow local physicians. It is a program that, in 2019, is still on the leading edge.

“Horizons in Medicine enables students who don’t have the opportunity to shadow in doctor’s offices to meet with doctors, train under medical students, and be in an actual anatomy lab in high school. It allows students to have that experience,” said Lakia Young, M.P.A., ’12, director of admissions at the Boonshoft School of Medicine and director of Horizons in Medicine from 2013-2018.

“I think the 40th anniversary is a testament to the Boonshoft School of Medicine’s mission to increase diversity,” said Kevin Watt, M.D., ’95, assistant dean of diversity and inclusion. “Being around and still being functional is proof of that commitment.”

Many program attendees are encouraged to apply by alumni like Patterson. Each year, several of his recommendations fill the ranks of bright, young students who participate. Patterson has been mentoring those in the program for more than 20 years.

“Giving them the opportunity, the exposure, is an honor to be able to do. It’s something, in my eyes, that’s required of me. It helped me get started. Horizons provided exposure and encouragement,” Patterson said. “I need to make sure I pay that back and help others see the importance of what it means.”

There are 20 students in the program every summer. Students like Aaliyah McClure, who completed Horizons in Medicine while a student at Northmont High School. After graduating in 2015, she attended Wright State University with support from the Horizons four-year scholarship. In 2019, McClure will complete a Bachelor of Science in Psychology with a concentration in behavioral neuroscience. She already has been accepted to attend the Boonshoft School of Medicine, and may one day specialize in neurology.

Through the program, McClure learned lessons about anatomy, medical terminology, and biochemistry. The activities helped her to understand how much time was needed to study medicine and how rewarding it feels to comprehend a difficult lesson. She shadowed physicians at the Dayton Veterans Affairs Medical Center, and practiced taking pulses and blood pressures. McClure also went through various medical simulations and met prominent surgeons. She learned a great deal about the reality of medicine within a hospital setting.

“All of our teachers were exceptional and amazing during the program but, specifically, Yasamine Edwards left a huge impact on me. She was so encouraging with trying to help us understand the material for our quizzes and sincere in creating a genuine connection with us by sharing her story of applying to medical school,” McClure said. “Getting to see her accomplish her goals over the years as a medical student at Boonshoft was a motivating force for me to not give up on my dream of becoming a doctor.”

Edwards, a third-year medical student from Dayton, shadowed physicians at St. Elizabeth pediatric hospital during her time in Horizons in Medicine. The experience taught her how to properly interact with patients. Like others, she credits the program with opening her eyes to the possibilities of a career in medicine.

“Participating in the Horizons in Medicine program helped with my desire to become a physician because it gave me hope that my dream was actually attainable. Sitting and learning in the classrooms where medical students received their education was inspiring to me at that time,” Edwards said. “I think the program gave me an extra push to continue being the best student that I could so I would be ready when the time came for me to enter medical school.” 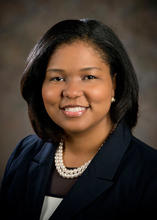 For Atteh Akoto, a first-year student at the Boonshoft School of Medicine from Englewood, his path to medical school also ran through the Horizons in Medicine program. Akoto also saw his own potential by learning through doing and seeing the knowledge of the medical students who went before him. The experience made it real.

“I remember specifically medical terminology, biochemistry, and especially gross anatomy, as it was my first experience that was my signal that said, ‘Hey, you're really in a medical school,’” Akoto said. “And these classes, while difficult at first, also provided me a good foundation that I've been building on ever since.”

He spent time shadowing attending physicians, residents, and physician assistants at Miami Valley Hospital. Akoto’s time shadowing emergency room doctors was interesting and fast-paced. One of his more memorable moments came when a girl his age was hit by a car while riding her bicycle. She had to get a CT scan, and the imaging inspired Akoto’s interest in radiology.

“The time I spent in Horizons influenced my choices in medical school years later. I knew that I wanted to attend a smaller, community-oriented medical school after spending so much time at Boonshoft,” Akoto said. “It was this distinction that made the Boonshoft School of Medicine my first choice, and makes me so proud to be in the class of 2022. In the future, I could give back as one of the students who teaches anatomy.”

Michelle Durrant, M.D., ’16, also learned a great deal from shadowing local doctors. She valued her Horizons in Medicine experience so much that she volunteered while a medical student by serving as a program assistant one summer.

“I think that having day-to-day contact with program assistants who are medical students who look like the students and come from similar communities helps them to realize that they too can become a medical student and eventually a physician,” Young said. “I meet so many students who want to be physicians but don’t believe that they can, and are easily discouraged in the pre-medicine part of the pipeline.”

One of Durrant’s most formative shadowing experiences was with Peter Ekeh, M.B.B.S., professor of surgery at the Boonshoft School of Medicine. She was exposed to breast biopsies in clinic, routine surgeries, and even trauma surgeries. Durrant counts herself extremely fortunate to work with Ekeh, who made her shadowing experience worthwhile and interesting.

“I can firmly say that the Horizons in Medicine program is what led me to medicine,” Durrant said. “Horizons was my way of getting my foot through the door and getting the exposure that was my driving force through undergrad and medical school.”

For Young, Watt, and the countless others who have helped to keep the program going over the past 40 years, alumni like Durrant and Edwards are proof that Horizons in Medicine changes lives. “The successes that we cherish are in all the people who stay connected to the program,” Young said.

Patterson has seen the work of the advisory committee that selected students, which included many of the founders. He once served as a member on the committee. Nowadays, he continues to recruit and mentor Horizons in Medicine students at his office in west Dayton.

“I applaud the university and the folks in the Dean’s office and the Student Affairs office who continue to support and make the program happen — all the folks there that make it possible,” Patterson said. “I’m glad that we’re celebrating it. It’s made a big difference in the lives of a lot of people, and is a huge value to our community.”