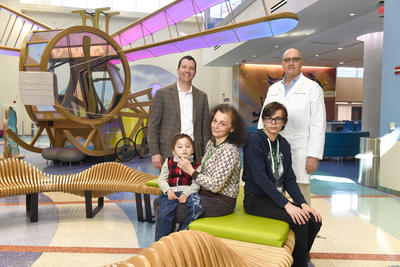 In April 2021, a 4-year-old underwent a novel brain surgery at Dayton Children’s Hospital. With four catheters inserted through the little boy’s skull, the surgeon injected into his brain a fluid containing over 37 trillion viral particles, each containing DNA for a human gene, a first-of-its-kind experimental gene therapy for Canavan disease. For comparison, this huge number of microscopic particles injected into the brain is even more than the number of stars in the Milky Way galaxy.

Canavan disease is a rare genetic neurological disease that typically presents in infants between 2 and 12 months of age. It destroys vision, speech, and motor functions. Symptoms include seizures and an abnormally large head, which appears floppy due to poor head control.

Reported worldwide, Canavan disease is more frequently found in children of Ashkenazi (Eastern European) Jewish decent, when both parents are carriers of the gene that causes the disorder. Though the precise prevalence is unknown, there are estimated to be fewer than 500 children with Canavan disease today in the United States. Most do not live past age 10.

Janson and Lober are the co-principal investigators on a Canavan disease clinical trial, a first-in-human clinical trial taking place at Dayton Children’s. The two connected on the trial in 2019, but it is work that has been in the making for nearly two decades.

THE RIGHT PEOPLE AT THE RIGHT TIME

In the 1990s, Christopher Janson was a student at the Yale School of Medicine, and the gene responsible for Canavan disease had just been discovered. Gene therapy, especially for neurological disorders, was still a new concept. A pair of Yale researchers, Matthew During, M.D., and his associate Paola Leone, Ph.D., were working on gene therapy for Parkinson’s disease. Janson’s interest in gene therapy and neurosurgery drew him to their research, and he began working in their lab. During and Leone would later become his mentors.

“I sort of fell into this work, with the right people at the right time,” said Janson. While working in During and Leone’s lab, a somewhat serendipitous event occurred. Two infants from Connecticut and New York were diagnosed with Canavan disease. The families, devastated and desperate to help their children, were aware of During and Leone’s work with gene therapy and offered to provide funding for Canavan disease research.

The families, the Karlins and Sontags, started several nonprofit research foundations and raised significant funds, which gave the research momentum. “Quickly, we went from knowing the gene responsible for Canavan existed, to cloning it in the lab, and creating a viral vector suitable for use in a human. Literally bench to bedside in two years,” said Janson.

The initial procedure involved a nonviral vector called LPD, made with a collaborator at the University of Pittsburgh, but later iterations used the adeno-associated viral vector (AAV), a very small nonpathogenic virus that does not cause illness, to deliver small amounts of genetic material to neurons in the brain. In 1996, New Zealand native During traveled to his home country to oversee the first human gene trial for Canavan disease with the nonviral vector on Lindsay Karlin. Two years later, During, Leone, and their team performed the same procedure in the United States on Jacob Sontag.

Results were positive from both procedures. Karlin showed improved vision and better head control, and the Sontags remarked their son was like a completely new person. This garnered media attention. In 1998, The New York Times Magazine published a story about the Karlins and Sontags funding the research, the outcome of the procedures, and the work being done by During and Leone. Sontag and his mother were featured on the cover.

Following graduation from medical school, Janson deferred residency to work in a post-doctoral position in human gene therapy with During and Leone. In 2000, they relocated to Thomas Jefferson Medical School in Philadelphia. Janson helped secure funding from the National Institutes of Health (NIH) to continue their human gene therapy research for Canavan disease, together with private foundations.

Gene therapy trials on children continued using AAV, which were also in preclinical testing for Parkinson’s disease. During 2000–05, Janson and Leone collaborated on an NIH-funded clinical trial, the first gene therapy for a neurodegenerative disorder, spearheading other work in the field. They saw improvements in behavior, such as fewer seizures, but patients were not being cured. The trials proved they could change the biochemistry of the brain, a very important finding, but they were not able to target the primary cells of interest due to limitations of viral vector technology at the time.

Canavan disease is known as a leukodystrophy, because the so-called white matter is primarily damaged. White matter consists largely of myelin, a protective sheath for the brain, required for effective neurotransmission. A mutation to the ASPA (aspartoacylase) gene affects the gene’s ability to properly break down the enzyme NAA (N-acetyl-L-aspartic acid) which builds up, causing the myelin to fall apart. “The brain becomes full of holes and waterlogged like a sponge,” said Janson. Unfortunately, the first generation of viral vectors had targeted neurons in the so-called gray matter, and selectively targeting white matter remained an elusive goal.

In 2016, a colleague of Janson and Leone discovered that changing one amino acid in the AAV capsid (or outer shell) drastically changed its behavior and the cells it targeted. They were able to direct the new viral vector to oligodendrocyte cells, essential for the production of white matter. Tested in animal models, the new viral vector with ASPA, directed at the oligodendrocyte cells, cured Canavan disease in mice. Janson and Leone published this latest and biggest discovery. This new version of AAV gene therapy was anticipated to be a game-changer. The discovery was licensed to Pfizer, which funded additional research on viral vectors but opted not to commercially develop Canavan gene therapy.

Soon after publishing their new findings in 2016, Leone, who was in New Jersey with Rowan University School of Medicine, was approached by the Landsmans, a family from New York with two children recently diagnosed with Canavan disease. They found Leone through social media and the article she published with Janson about the new viral vector and gene therapy.

Similar to the families Leone had worked with before at Yale and Thomas Jefferson, the Landsmans were desperate to help their children, and offered to assist with funding if she would pursue a new Canavan disease clinical trial. Leone promptly reached out to Janson, who agreed to be the lead physician for a new clinical trial in 2017.

Janson, who was with University of Illinois–Chicago College of Medicine, spent the next few years preparing for the new trial. He helped to secure preliminary funding, designed the clinical protocols, and worked with a new clinical team on obtaining approvals from the Food and Drug Administration (FDA). The Landsmans founded the Cure Canavan Fund in to help raise money, and additional children joined the Landsmans as trial participants.

Additional FDA requirements and issues with institutional support created unexpected delays and significantly increased the costs. Janson and the families, ready to move forward, were getting anxious.

Robert Lober, M.D., Ph.D., came to Dayton and BSOM in 2015 from California, where he was an assistant professor of neurosurgery with Stanford Medicine. “Right away, BSOM was interested in helping me get established with research,” said Lober. His research interests include pediatric brain tumors and using advanced imaging and molecular techniques to develop treatments.

In 2019, Janson contacted Lober, whom he had met a few years earlier during a facilities tour in Dayton. “I reached out hoping he would remember who I was,” said Janson. He shared with Lober the details of the Canavan disease trial and his need to move forward. Lober immediately felt Dayton would be a good location for Janson’s clinical trial. “The great facilities at Dayton Children’s Hospital, and BSOM’s desire to build and support more research infrastructure—it’s the perfect fit,” added Lober.

Following a presentation on the Canavan disease trial by Leone and Janson, Dayton Children’s agreed to support the project. Janson arrived in Dayton from Chicago in December 2019, bringing with him a newly awarded NIH grant on the pathophysiology of Alzheimer’s disease, which used some of the same recently discovered AAV technology proving successful curing Canavan in animal models.

Dayton Children’s is the first hospital in the world to use this new gene therapy on a Canavan disease patient, which earned national attention. Stories have appeared in People Magazine, TODAY Show, and the Jewish Observer. The coverage led to further financial support for the trial. From May to June 2020, People Magazine readers donated $200,000 to the Landsmans.

At regular intervals after surgery, the treated children will return to Dayton for assessments, checking their neurological status and development, measuring motor function and learning capabilities appropriate with their age. The team is also using advanced imaging to directly measure brain volumes and myelin content. The data collected is compared to identical assessments done pre-surgery.

Janson and Lober are pleased with how the children are progressing. “Follow-up data in treated patients demonstrate favorable safety and tolerability with encouraging initial efficacy results,” said Lober in a February 2022 Businesswire.com story. They are looking forward to continuing to progress with the study and to perform procedures on more children.

Lober has been overwhelmed by the support from BSOM’s clinical partners for the trial, and for the families when they arrive in Dayton. Dayton Children’s even built a special space for clinical evaluation of trial participants. Lober added, “It has been awesome to see all the clinical partners align with the academic side on this!”

The investigators have heard from new patients and their families across the country and around the world, from North and South America, Europe, Asia, and the Middle East.

At this time, the investigators are collaborating with Myrtelle, Inc., a gene therapy company in Massachusetts funding the continuing study. In 2021, Myrtelle entered into an agreement with Pfizer, Inc. to develop and commercialize their patents on AAV-based gene therapy. The company is named after Dr. Myrtelle Canavan, the Harvard-affiliated pathologist who first described the clinical disease.

Janson is proud of this trial. “We started this ourselves as a kitchen table project, using patient funds to get it going and FDA cleared,” said Janson. “I’m confident that this gene therapy will lay the foundation for future trials of many other genetic diseases. There is already proof-of-principle, but a lot more work needs to be done before it becomes mainstream. The current position of gene therapy is analogous to the position of aviation at the time of the Wright brothers. It will definitely take off; it’s just a matter of time.”

Along with a treatment for Canavan disease, and providing hope for the children and their families, Janson and Lober believe information from this trial will help with developing treatments for more common diseases like Parkinson’s and Alzheimer’s. Lober added, “This clinical trial puts BSOM and Dayton, Ohio, on the world map, and extends our reach to help many more people all over the world. I’m honored and grateful to do my part for these patients, in order to improve their lives and advance the state of the art of gene therapy.”
—Lisa Coffey