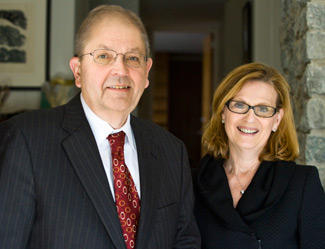 Larry W. Lawhorne, M.D., retired from Wright State University Boonshoft School of Medicine after 13 years of service to the institution. He was a professor and founding chair of the Department of Geriatrics, and a staff physician with Wright State Physicians. A reception was held in his honor.

“One of the reasons I chose to accept the opportunity here at Wright State was the welcoming nature of the institution and the School of Medicine leadership,” Lawhorne said. “Drs. Howard Part, Margaret Dunn and Al Painter were instrumental in getting the department off to a good start.”

In the early years, the support of department chairs, including Drs. Mark Classen, Arthur Pickoff, Gerald Kay and Glenn Hamilton, was especially helpful. Dr. Lawhorne credits Dr. Steven Swedlund for getting the fellowship program up and running and added that, “he has mentored our fellows in his quiet competent way ever since.”

Since establishing the Department of Geriatrics, Dr. Lawhorne has focused on building capacity, in both clinical and educational areas. The department is now engaged in research activities, including the role of wearable sensors to help vulnerable adults remain in their homes longer and safer and the effectiveness of a person-centered medical home for people with dementia and their families.

Dr. Lawhorne has been widely published throughout his career.  Recent scholarly work includes outcomes of a person-centered home for people with dementia, an exploratory analysis of potential new biomarkers in cognitive function, and sleep quality prediction in caregivers using physiological signals.  The last work was done in collaboration with Dr. Tanvi Banerjee in the Department of Computer Science and Engineering and Dr. Jennifer Hughes in the Department of Social Work.

Of his many accomplishments while at Wright State, Dr. Lawhorne specifically noted, “The department’s teaching sessions and precepting work with students, residents and fellows. These activities have enabled us to incorporate the principles of geriatric medicine into the training programs in the medical school. Our students, residents, and fellows will soon be caring for the ever-growing population of older adults in Ohio and across the country. With the support of our capable and caring clinical staff, the care we have provided to older adults through Wright State Physicians has allowed us to touch many lives.”

Dr. Lawhorne is also proud of the work the Department of Geriatrics has done in the area of community-based dementia care. Research on the effectiveness of a person-centered home for people with dementia led to the development of a weekly cognitive assessment clinic at Wright State Physicians.

After graduation from the University of Virginia School of Medicine, he went on to the University of Iowa, where he completed his residency in family practice.  Following residency, Dr. Lawhorne spent the next 30 years in patient care at several hospitals, mental facilities, rehabilitation centers and clinics. During this time, he began to focus on neuropsychiatric conditions, including dementia and Parkinson’s disease, as well as patients with spinal cord and traumatic brain injuries. He participated in several local, state, and national professional organizations, both as a member and in leadership roles. He served as president of the American Medical Directors Association in 1997-98 and led its research network from 2000 to 2006.