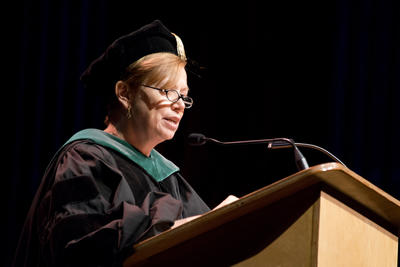 No dean has known the medical school better than Dr. Margaret Dunn. With the end of her time as dean approaching, the Wright State University Boonshoft School of Medicine will say goodbye to a leader whose wisdom has guided the school, in one form or fashion, for nearly four decades.

Dr. Dunn will return to a faculty position with the Department of Surgery after her service as dean is over. Many have had the good fortune of working with her over the years. Her leadership and service to the medical school will be dearly missed.

The oldest of four children, Dunn grew up in a large, extended Irish Catholic family that included 46 first cousins. She was raised on Long Island, as were her parents. They moved from New York City to Oakdale on the south shore when Dunn was four.

Because her maternal grandfather was unable to work, her grandmother supported her five children by working in hospitals, which led to Dunn’s interest in medicine. Although her grandmother’s formal education had ended before high school, “She was a really smart woman,” said Dunn. “She never let the lack of formal education make her think she wasn’t a bright person. Which, of course, she was. She had five kids to raise.”

Although there were no physicians in her family, Dunn remembers getting interested in the idea of becoming a physician at the young age of 10 or 11, and she soon became a candy striper. “It seemed like a way to help people, and it was intellectually interesting,” Dunn said.

In her teens, she applied to an accelerated medical school program at Jefferson Medical College in Philadelphia that combined an undergraduate and medical education into six years. She was accepted and began medical school at the age of 18.

After graduation from Jefferson in 1977, Dunn did her residency at Einstein-Montefiore in the Bronx, where she served as chief surgical resident. She met her future husband, Bill Spohn, when he was an intern doing a pediatric residency. He was her classmate’s resident.

After finishing his residency in pediatrics in Delaware, Spohn followed her to New York. He joined the Public Health Service and worked in the Lower East Side of Manhattan for two years. “And then he did his pediatric pulmonary fellowship at Mt. Sinai, so we ended up finishing up at the same time,” she said. They married in 1982.

Dunn was offered a faculty position at Einstein Montefiore. She would have stayed, but her husband could not find a position he liked because there were so many pediatric pulmonologists in New York. Since many positions were open in other parts of the United States, he landed an interview for a Wright State University position at Children’s Medical Center of Dayton. Although he considered it a practice interview, after interviewing he decided he really liked the position and Dayton. “I told him he could decide where we moved next,” she said.

Dr. Dunn first landed a faculty position in the Department of Surgery at the Wright State University School of Medicine in 1982. She became the first woman on the surgery faculty and one of the very few women faculty members in the medical school. At that time, the surgery department was located at Kettering Hospital, but Dunn spent most of her time at the Dayton Veterans Affairs Medical Center.

Dr. Dunn went on to serve as surgery clerkship director for 13 years. In 1998, she was appointed associate dean for faculty and clinical affairs. It wasn’t long after that she became president and CEO of Wright State Physicians, the school’s faculty practice plan.

Dunn was instrumental in the creation of the Wright State Physicians Health Center on the Wright State University campus that provides much needed medical care to Wright State students and the residents of Raider Country. The $15 million facility has helped retain outstanding medical faculty and staff in support of clinical, research, and community service activities.

She was named associate executive dean of the Wright State University Boonshoft School of Medicine in 2007. She is a Fellow of the American College of Surgeons and serves on its Board of Regents, a position she was elected to in 2011. In the same year, she was named one of the Ten Top Women of 2011 by the Dayton Daily News.

Dunn helped to launch the Neuroscience Engineering Collaboration, an effort to bring together the scientists and physicians affiliated with the Neuroscience Institute and Wright State University’s systems research engineers to create a unique synergy between biomedical research and engineering.

Dunn was appointed dean of the Boonshoft School of Medicine in 2015. As dean, Dunn has graduated more than 600 medical students. In her nearly 40 years working at the medical school, Dunn has helped the 3,534 alumni who know Wright State as their alma mater.

Dr. Dunn will continue to touch the lives of those who are fortunate enough to learn from her as she returns to a full-time faculty position in the Department of Surgery.