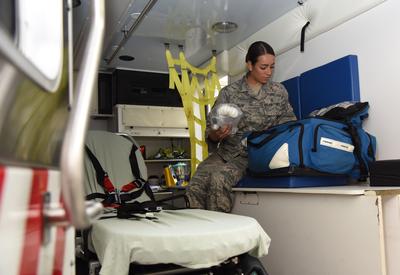 Juliet Corcillo, a first-year medical student from Staten Island, New York, served nine years in the U.S. Air Force before entering medical school. Her experiences as a medical technician were formative in her decision to pursue a career in medicine.

Going to medical school wasn’t always her goal. Corcillo had initially joined the Air Force to help pay for a college degree. She left for service right after her high school graduation, at the age of 17. Her plan was to go in for four years, qualify for G.I. Bill benefits, and then pursue an undergraduate education after completing her tour of duty.

“As the oldest of four children, my parents, to put it nicely, told me I would have to figure out how I was paying for college. Even with scholarships, it wasn’t feasible, and I wasn’t willing to put myself in that much debt right out of high school,” Corcillo said. “My initial plan was to serve my four years, get out, and go to school and pursue a degree at that time. However, once I began my career as a medical technician, I was immediately drawn to the realm of military medicine and realized that I wanted to make it a career.”

Being new in the field of medicine, she hadn’t really considered medical school a possibility until one of her mentors, Erica Radden, M.D., a family medicine specialist at Dover Air Force Base in Delaware, discussed it with her and asked her to consider it.

The nudge was encouraging, and Corcillo soon found herself deployed to Bagram Airfield in Afghanistan. There, she would encounter trying situations and wartime injuries that convinced her that becoming a doctor was right for her. She spent six months working in a foreign country, sharing a dorm room with seven other people, and was restricted to the perimeters of a military base. She calls it the highlight of her career so far.

“Without a doubt, my deployment to Afghanistan was one of the strongest reassurances that I was on the right path. I distinctly remember the first trauma I assisted on. My patient was a young soldier who had suffered a blast injury and lost his legs. As a medic, I did my part on the trauma team, starting his IVs, setting up the cardiac monitor, and obtaining vital signs,” Corcillo said. “But once my part was complete, I felt somewhat helpless. All I could do at that point was hold his hand in an attempt to comfort him as we waited for the operating team. It was up to the doctors to decide what was next, and that was the exact role I wanted to be in — I just wanted to be able to do more.”

Corcillo realized that the journey to medical school would be trying. And during the nine years she served in the military before attending, she met the challenges head on. She completed her bachelor’s degree while also fulfilling a full-time military commitment.

During her last semester of college, she balanced taking seven classes while working 12-hour night shifts in the emergency department, and studying for the Medical College Admission Test.

“It was no easy task, but I knew what it was going to take to get here,” Corcillo said.

Through her service in the Air Force, Corcillo gained exposure to many medical specialties. Her training as a military medical technician made it possible for her to work in almost any section within a hospital. She’s worked in family medicine, cardiology, and emergency medicine for much of the past five years.

For Corcillo, nothing compares to the variety of patients she sees in the emergency room. She’s excited that doctors must possess a vast knowledge of medicine while also being able to perform in a very stressful environment.

“Amidst the chaos, there are still split-second, life or death decisions that need to be made,” Corcillo said. “I am drawn to it. That’s where I love working and feel that I perform best.”

Corcillo is a recipient of the Air Force’s Health Professions Scholarship and remains a service member while taking classes. Day to day, her sole focus is medical school, though she has some military commitments to fulfill during summer break. She has committed to serving as a doctor in the Air Force after graduation.

“I am so thankful and so proud that I am getting to live out my dream, not only attending medical school, but knowing that I will get to join the ranks of some of the greatest medical professionals, back on active duty in the Air Force,” Corcillo said. “While the curriculum is stressful enough, it takes such a weight off my shoulders knowing that the military is paying for me to go to school.”

As a future military doctor, Corcillo is most interested in deploying as a physician. She desires to return to Afghanistan or another battlefield to care for troops. She wants to provide direct care to those who put themselves in harm’s way.

Serving in the military has given her a great appreciation for the sacrifices that service members make. It’s also taught her some insightful lessons about teamwork, holding others up, and making the best of bad situations. Resilience is instilled through military service and quitting is never an option, she said.

“The military is 100 percent what you make of it. It has opened so many doors for me, and presented me with so many opportunities and experiences,” Corcillo said. “I have truly enjoyed every single one of my years in and, looking back, I have no regrets in the path I took to get here today.”