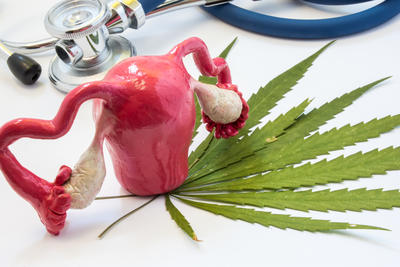 Shanice Akoto, a medical student enrolled in the Boonshoft School of Medicine Physician Leadership Development Program (PLDP), was working in her practice placement at a women’s health center when she learned that many of the women from high-risk communities were using marijuana before and during pregnancy.

“Some research studies suggest that marijuana use during pregnancy can affect attention, memory, problem-solving skills, and behavior of children later in life,” said Akoto, who was working on a Master of Public Health degree through the Boonshoft School of Medicine’s PLDP program, a five-year program that facilitates the completion of either a Master of Public Health or Master of Business Administration while completing medical school. “Given the high reported rates of marijuana use in the Dayton community along with the high infant mortality rates, this was a topic I wanted to research.” 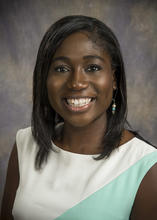 Akoto’s study, “Marijuana Use Among Pregnant Women in a High-Risk Population,” evaluated marijuana use in pregnant women living in Montgomery County, Ohio, in the highest risk zip codes. She knew from research conducted by the CDC that more women are turning to marijuana to ease nausea and other symptoms of pregnancy.

Her research focused on whether use of marijuana at delivery was lower in women enrolled in CenteringPregnancy®, a group prenatal care program that brings eight to 12 women all due at the same time together for care, compared to women only enrolled in Healthy Start, a program that provides resources to women and children in families up to a certain percentage of the poverty line. These women receive support from their peers and are encouraged to make healthy decisions for themselves and their babies. The group program addresses nutrition, common discomforts of pregnancy, stress management, what to expect in labor and delivery, breastfeeding, and infant care.

She studied marijuana use among 182 women who delivered their babies between January 2016 and April 2017. Of the 182 participants in the study, 144 were African American. The results showed that African-American women with a high school education living below the poverty line had higher rates of tetrahydrocannabinol (THC), the chemical responsible for marijuana’s psychological effects. There was no significant association between participation in CenteringPregnancy® and marijuana cessation by the time of delivery. However, rates of cessation were higher among those in Healthy Start alone.

Akoto found that women in the study who used marijuana had a higher likelihood of delivering their babies prematurely. But women who participated in CenteringPregnancy®, group prenatal care, were more likely to deliver at full-term.

“What was surprising was that the women who participated in the CenteringPregnancy® program had a higher likelihood of using marijuana at the time of delivery compared to women who were not enrolled in the program,” she said. “This was surprising because, in the sessions, the group talks about all the ways in which women can have healthy pregnancies and decrease the odds of delivering preterm, including abstaining from illicit substances such as marijuana.”

She presented her research at the Latino Medical Student Association National Conference in Miami in April 2018. “It was a great experience to be able to share my research with my colleagues and learn about the work they are doing at their respective institutions,” she said. “Infant mortality rates are especially high in African-American and Latino communities, so it was an honor to present this study at a conference dedicated to improving Latino and minority health.”

Akoto’s roots have played a role in her decision to help improve health outcomes for minorities. Her parents were from Ghana, but she was born in England. She and her parents immigrated to the United States from the United Kingdom when she was 6.

“Being a first-generation immigrant, having connections across the world and living in various places has influenced the relationships I’m able to have with others,” she said. “It has shaped how I view people and the world.”

In addition, volunteering in inner-city Lansing, Michigan, as an undergraduate student at Michigan State University provided her with a better understanding of the social and economic conditions affecting minorities and underserved communities. “I saw everything from homelessness to minority children with parents in jail to babies in the neonatal intensive care unit going through opioid withdrawal,” she said.

Through her Master of Public Health program at Wright State, she learned how to locate and connect patients with resources in their communities. She gained a better understanding of why a patient may or may not be able to take their medications as prescribed or eat a healthy diet and exercise as often as they should. She also was introduced to the complex world of health policy and how it affects the patients she has encountered through her clinical experiences.

She believes the Master of Public Health degree will make her a more well-rounded physician in the future. She plans to enter a residency in obstetrics and gynecology after she graduates from medical school in May 2020.

“I love women’s health and being able to care for women at all stages of life, from adolescence to menopause, through pregnancy and child birth,” said Akoto, who also wants to become involved in health advocacy for women’s health issues. “There are so many women who feel like they don’t have someone they can trust to discuss their most intimate health concerns. I love the idea of being a physician who can provide care, education and support to women throughout their lives.”