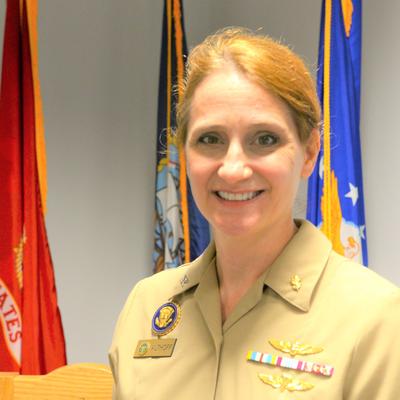 Juliann Althoff, M.D., an Ohio native, has traveled the world throughout her medical career. She has served and lived in Japan, Spain, and over 13 other locations throughout the world. She has served as the senior flight surgeon for Marine One, the presidential helicopter squadron. Now, she has returned to Dayton to continue assisting in research and to oversee operations for the Naval Medical Research Unit Dayton (NAMRU-D).

Althoff serves in a leadership position for NAMRU-D, where her mission is to optimize the readiness, performance, and survivability of operational forces through environmental health effects, toxicology, and aerospace medical research and development. “We really focus on performance in extreme environments,” Althoff said.

Within these areas, NAMRU-D works to ensure that safety policies and standards match with current research about exposure and workplace hazards. They also develop technology to ensure officer safety.

For example, NAMRU-D developed and tested goggles for the coast guard. These goggles will protect pilots from lasers fired at them in an airplane cockpit. “This was a real problem,” Althoff said. “Our lab was able to be part of the solution and provide the solution.”

Althoff has also worked to assist in fighting the ongoing COVID-19 pandemic. Before she was stationed in Dayton at Wright-Patterson Air Force Base, she was the chief medical officer for the Naval Medical Center in San Diego. Before the COVID-19 vaccine was available, Althoff used other preventative measures, such as masking, social distancing, hygiene, and avoiding large social gatherings, that were proven effective during the 1918 flu pandemic to protect her staff and colleagues.

Along with her colleagues, Althoff ensured that patients received the best possible care though quality assurance and patient safety initiatives. As the chief medical officer, Althoff oversaw coordinating treatment efforts and she worked hard to ensure that each office and branch provided the highest quality of service to their patients, along with keeping staff safe by utilizing more virtual appointments and avoiding in-person contact when possible.

Ever since she was young, Althoff wanted to be a doctor. She was inspired by her grandfather, who passed away during the flu pandemic in 1918.

She received her bachelor’s degree from Ohio Wesleyan University before she graduated from the Boonshoft School of Medicine in 1995 and completed her flight surgeon training in 1997. She received her Master of Public Health degree from the Uniformed Services University in Bethesda, Maryland, and a Master of Arts degree in national security and strategic studies from the Naval War College in Newport, Rhode Island. In 2005, she completed a residency in general public health and preventative medicine at the Uniformed Services University.

She then served in Okinawa, Japan, where she created a biohazard response plan for the U.S. Pacific Command, which became the blueprint for the way the Department of Defense (DOD) responded to the H1N1 pandemic, also known as the Swine Flu, in 2009.

From 2016 to 2019, Althoff served as executive director of the Defense Health Board. She led the DOD’s only federal advisory committee on health. She assisted in developing two reports on pediatric health care and low-volume, high-risk surgical procedures. These reports provided hospitals with information that improved care opportunities. The committee was made up of civilian experts and specialists, who assisted the DOD to examine areas of interest in the world of health. Althoff said the expertise on the board was expansive. “It was amazing to be part of the committee,” Althoff said. “The caliber of the people on the board was shocking, it was a wonderful role for advising.”

Althoff said she is glad to be back in Dayton and is happy to be working with NAMRU-D. Her labs work with over 54 partners, including NASA, Wright State, and other educational institutions. “These partnerships are essential and highly valued aspects of successful research and development efforts,” she said. “We work with a lot of people who are graduates from Wright State. It’s been fantastic.”

Althoff said she has enjoyed reconnecting with the BSOM and the Wright State alumni society. She enjoys seeing how far the medical school has come and is proud to see the direction the school is taking.—Micah Karr