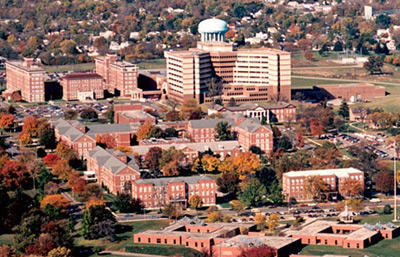 In 1867, what would become the Dayton Veterans Affairs (VA) Medical Center was then known as the National Asylum for Disabled Volunteer Soldiers, Central Branch. In Dayton, it was simply known as the “Soldiers’ Home.” At its peak in 1884, the Home provided all levels of care to over 7,000 veterans and, by 1910, over half a million Americans were visiting the Home each year.

In addition to spending time with the Civil War veterans who lived there, visitors came to see the Home’s formal gardens and working dairy farm, its deer park, and a tiny zoo that housed alligators and a bear. The Memorial Hall housed an assortment of plays, concerts, and speakers.

As the Civil War drew to a close in 1865, and just a month before his untimely assassination, President Abraham Lincoln signed legislation authorizing a National Home for disabled veterans. The National Home included an Eastern Branch in Maine, a Central Branch in Ohio (Dayton), and a Northwestern Branch in Wisconsin. Other branches were added later, but the medical center at Dayton had the distinction of being the largest and most elaborate of the Soldiers’ Homes through the 19th century. When completed in 1870 at a cost of $185,000, Home Hospital was acknowledged widely as America’s best-constructed and most efficient hospital.

The three-story brick building initially provided 300 patient beds, which subsequent additions increased to 840. Each of the hospital’s six wards included separate bathing and toilet facilities, and each floor contained a dining room that was connected by dumbwaiters to the central kitchen located in the basement. The hospital was heated by steam, and its boiler was housed in a separate building that was located over a hundred feet from the building as a safety precaution.

The hospital was the first in Montgomery County to be built and operated on a permanent basis. Temporary hospitals had been set up previously to meet emergency needs. One at the corner of Third and Main Streets, where the Courthouse now stands, served American troops during the War of 1812. Another provided care for victims of a cholera epidemic in 1849.

In 1885, the medical staff at the hospital included a chief surgeon and two assistants, an eye and ear specialist, and medical interns who served without pay. The patient census that year included 196 veterans with ear disorders and 134 with eye diseases. Also treated were 112 patients with paralysis, 80 with epilepsy, 49 with heart disease, and 11 with cancer. The 450-bed hospital was nearly 100 percent occupied. Nearly two-thirds of the veterans applying for admission that year had some form of heart disease. Their average age was 53 years.

After more than 150 years of service, what Lincoln started has grown into one of Ohio’s largest integrated health care systems. The years have brought many changes to the buildings and grounds. Home Hospital was replaced by Brown Hospital in 1930, which in turn was replaced by the Patient Tower in 1992.

The original Home Hospital structure was destroyed by a fire in 1942. Home Hospital was unoccupied at the time of the fire, but it was fully equipped to support the medical contingency plan for World War II. The dairy farm and deer park have long since passed from the scene, but the National Cemetery remains the final resting place available to all eligible veterans.

In 1972, Congress enacted another law with historic impact for Dayton. The Veterans Administration Medical School Assistance and Health Manpower Training Act, also known as the Teague-Cranston Act, provided financial support to create five new American medical schools. One of the schools chosen to receive funding was at Wright State University.

Over the past several decades, the emphasis has shifted from inpatient to outpatient services. Wider access to health care for veterans is a primary goal and the system has provided an increasing amount of care in outpatient clinics, particularly in smaller communities and rural areas across Ohio. It ties in perfectly with Wright State’s mission as a community-based medical school.

The Dayton Veterans Affairs Medical Center provides continuity of care for tens of thousands each year. The center’s Patient Tower has only half the number of inpatient beds as the 1870 Home Hospital, but its outpatient clinics receive hundreds of thousands of visits each year. Over the years, the Veterans Affairs system has continued to evolve along lines similar to the nation’s health care system as a whole. The Wright State University Boonshoft School of Medicine continues to be an important partner.

In addition to serving as a primary training site for internal medicine residencies, the Veterans Affairs Medical Center offers integrated residencies in surgery and dermatology. Internal medicine residents, who are encouraged to assume maximum patient care responsibilities commensurate with their clinical abilities and training levels, have immediate access to 30 full-time Department of Internal Medicine and Neurology faculty for supervision and support.

Medical residents rotating there receive comprehensive training in primary, secondary and tertiary care. Because the medical school also uses the collaboration as a focal point for clinical research, residents experience research programs as an integral part of their education. The Veterans Affairs Medical Center offers the use of an extensive, modern medical library; access to the most up-to-date computer system in the Dayton area; and education in computer applications within medical care.

Although the third oldest Veteran Affairs Medical Center in the country, numerous enhancements and upgrades, including a state-of the-art simulation center and endoscopy facilities, enable the center to provide the highest level of care to veterans in the region. The simulation center features life-sized, computer-activated mannequins with heart rates, blood pressures, breath sounds, and other bodily functions, which are regulated in a control room by medical staff. There are six simulation rooms, three task-training rooms, and five debriefing rooms.

State-of-the-art audio/visual systems allow recording and playback of simulated events to enhance the learning experience. The simulation center also includes a nurse’s station, a medication and code cart room, and an auditorium with 125 seats. Medical students in the Prematriculation Program, a four-week summer program for incoming students, and residents from the medical school, have utilized the facility. In addition, students from the medical school’s Horizons in Medicine Program, a unique program designed to give disadvantaged high school students a sense of the career possibilities in health care, have visited the simulation center.