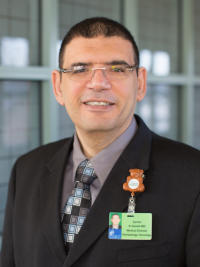 Ayman El-Sheikh, M.D., passed away from COVID-19 complications in February, 2021. El-Sheikh was a preceptor with the Boonshoft School of Medicine (BSOM). He was also the elective director and fourth-year sub-internship director for the hematology and oncology unit, teaching and working with BSOM students, residents and other learners. He was a mentor to BSOM medical students interested in pediatrics and hematology.

El-Sheikh led a team at Dayton Children’s Hospital of pediatric specialists, nurses, social workers and other professionals, ensuring children with cancer or blood disorders received the appropriate clinical care to meet the needs of their unique medical conditions. Regarding his patients El-Sheikh stated, “When I see the smile on their face at the end of the treatment, that’s the whole reward for me.”

Along with his fight to provide the best instruction to future physicians, and help cancer patients, El-Sheikh used to fight in the ring. In his younger years he was a boxer, winning a heavyweight title three times.