For some research scientists, there’s nothing sweeter than stopping a tumor in its tracks, or at least slowing it down. Just ask Julian G. Cambronero, Ph.D., a Boonshoft School of Medicine professor of biochemistry and molecular biology.

“This is a very satisfying moment,” said the professor, smiling as he reflected one afternoon last spring in his Diggs Hall office about his latest discovery, a novel protein that contributes significantly to breast cancer tumor growth.

The protein is phospholipase D (PLD), which Cambronero and his research team say is not only central to breast cancer tumor growth but to metastasis in the nearby lungs as well. Using mice as animal models, the team found that by introducing two new chemical inhibitors of PLD, they could shrink tumor growth and reduce subsequent lung metastasis by around 70 percent.

“Although it’s still early to tell, the application of these inhibitors to research in human tissue is the next step that could lead to better, less toxic treatments in the battle against breast cancer,” said Cambronero, who since joining Wright State in 1995 has garnered more than $6 million in research funding from the National Institutes of Health, the American Heart Association, the American Cancer Society, and other state and federal sources.

Breast cancer kills more women in the United States each year—about 40,000—than any other type of cancer, according to the National Cancer Institute. The disease strikes an estimated 232,340 females each year and 2,240 males.

Cambronero and his team’s findings were published in a June edition of Oncogene, one of the world’s leading cancer journals. The study’s authors are all Wright State colleagues. Besides Cambronero, they include research associate Karen M. Henkels, veterinarians Gregory Boivin, D.V.M., and Emily S. Dudley, D.V.M., of the Laboratory Animal Resources Department, and Steven J. Berberich, Ph.D., associate provost for faculty and staff affairs and former chair of the Department of Biochemistry and Molecular Biology.

Cambronero said the idea for his breast cancer research occurred to him in the summer of 2009 while vacationing in his homeland of Spain. He and his team had been researching PLD for many years by that time, finding in one study that leukocyte migration could be stopped by PLD inhibitors. While vital to our immune system, leukocytes can cause harm when deposited in large amounts to the wrong place at the wrong time. They tend to hang around the heart for too long following a heart attack, for example, damaging healthy tissue. What if these PLD inhibitors could stop malignant cancer cells, too? Cambronero wondered.

“Upon my return, I convinced a graduate student in the lab to do a pilot experiment, which, to my delight, indicated that the hypothesis was correct, that in the lab we could inhibit cell invasion with PLD inhibitors,” said Cambronero. “Since this ‘invasion’ is a precursor of metastasis, I immediately thought that this could have wider implications.”

Cambronero brainstormed for a few days and arrived at a three-pronged strategy to his study, an interdisciplinary approach that would involve research techniques in molecular biology, cell biology pathology, and animal studies.

But he had to overcome some early challenges first, including his lab’s limited experience at the time in tumor implants in animals. “It took us at least a year to learn the tech - niques,” Cambronero recalled. “We settled on commercially available immunodeficient mice, called SCID, and I had to write all protocols and get proper approval from the university. I also recruited for the project two D.V.M.s, Dr. Boivin and Dr. Dudley, to help me with the implants and the pathology studies that were going to follow.”

By the fall of 2011, the research team had the SCID and human breast cancer cells in hand, ready for experimentation.

From frustration to elation

In one experiment, the researches took low-invasive breast cancer cells and introduced the gene, called “pld,” that encodes for the PLD protein. This took several strategies and attempts before arriving at a successful mechanism. But once there, the results followed Cambronero’s expectation: The cells became highly aggressive. The researchers subsequently injected the cells into the SCID through a procedure called orthotopic xenotransplantation. The resulting tumors grew quickly and lung metastasis developed readily.

In the second experiment, the researchers took highly invasive, aggressive breast cancer cells and “silenced” the pld gene. This was tricky, and one of several difficulties in the study, Cambronero said. “It was frustrating that the gene was not completely knocked out using molecular biology techniques in our lab,” he said. “We had to try several approaches.” This is where Berberich, then the department chair, lent his expertise.

When the team finally injected the cells into the SCID mice, they found the cells were less invasive than in the previous experiment, the resultant tumors grew slowly and lung metastasis was diminished.

“That was an ecstatic moment...the moment you wait for in your research that eclipses all the frustrations of the last years.” Cambronero said.

It was the summer of 2012 and there was still one more experiment to go, one that would attempt to show a real-world application of the study’s findings, a way to deliver the science pharmacologically.

For this study, Boivin and Dudley took mice xenotransplanted with human breast cancer cells and surgically implanted micro-osmotic pumps underneath the skin on their backs. Henkels, Cambronero’s research associate of eight years, assisted. This was new territory for the longtime lab manager, though, and she had to learn anesthesia techniques and how to prepare the mice for surgery. The pumps, which were filled with two different inhibitors of PLD activity, painlessly delivered the drugs to the mice over 45 days.

Cambronero’s students were charged with examining the mice, checking for tumors, and reporting their findings to Cambronero. Early on they couldn’t find any tumors.

“No tumors yet? Really?” Cambronero asked his students. So the professor checked one mouse himself. No lumps. He checked another mouse. No lumps there either. Then another, and another. This was in stark contrast to the control group, the mice with breast cancer that weren’t receiving any PLD inhibitor. They all had lumps in their mammary pads.

For Cambronero, disbelief. So he and his students checked and rechecked again. They did so every other day for the next two weeks until they started to notice tiny lumps in the mice. The control mice, meanwhile, possessed lumps so large they were visible with the naked eye.

“I knew then that what we had found was important, and that it could have a potential application to humans,” Cambronero said. “This had turned into a bona fide preclinical research that could be the beginning of a process for future use in humans. I was ecstatic, yet cautiously optimistic as I knew many more experiments needed to be done.” 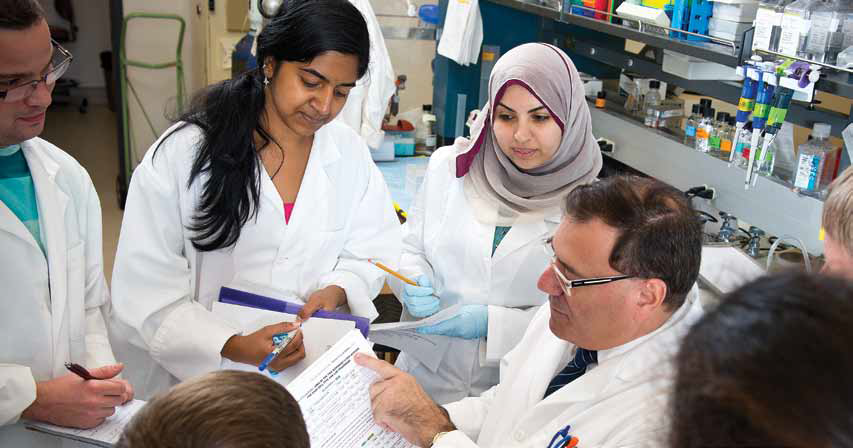 Cambronero has enjoyed much success in his career. He has published 90 peer-reviewed papers in scientific journals, he’s presented his research at 60 scientific conferences around the world, and he’s collected numerous awards for his work. Last June, he was named a Brage Golding Distinguished Professor of Research, a special award by the Board of Trustees to a WSU faculty member who has produced a significant body of work in scholarship and research that brings distinction to the university and national or international recognition to the faculty member.

But Cambronero’s breast cancer research is the first with a potential application for humans, in a devastating disease, no less. And while his study shows promise, he and his team fully realize that moving the research from the bench to the bedside of human patients is a long and tedious trek. He hopes that task will quickly follow, though. He is actively seeking a partner—a pharmaceutical company or physicians in a tertiary medical setting, perhaps—to move the research forward.

Meanwhile, Cambronero’s cancer research continues. He’s currently designing experiments to explore the combination of the immune system with cancer, looking at “tumor-associated leukocytes.” Cancer is so pervasive, he says, that malignant cells not only evade immune surveillance and elimination, the sneaky little devils co-opt leukocytes to work for their benefit and to help them grow.

“We are always thinking ahead,” he said. “It has been a long dream of mine to find ways to integrate different systems. Nothing in the body occurs in isolation, and research in biomedicine is moving in an all-inclusive direction.”