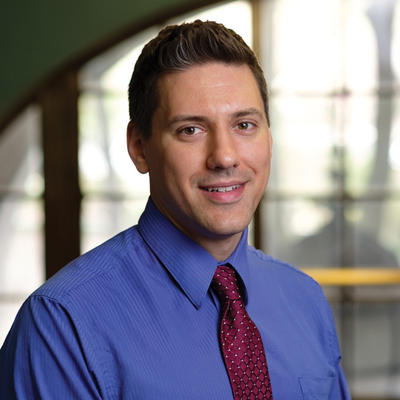 When Aaron Patterson, M.D., M.B.A., M.A., was a medical student at the Wright State University Boonshoft School of Medicine, his professors spoke to his class about how difficult the process of becoming a physician can be. But they emphasized they were there to support them. More importantly, they provided the pager number of a psychiatrist that the physicians in training could reach if they needed confidential support.
The prevalence of depression among physicians in training is high. Depression can be caused by work load, work inefficiency, and lack of autonomy and meaning in work. Left untreated, depression can lead to suicide. A 2003 study in the Journal of the American Medical Association estimates that 300 physicians a year die from suicide.

“Physician suicide is a significant problem,” said Patterson, who graduated from the medical school’s Physician Leadership Development Program with an M.D./M.B.A. dual degree in 2009. “Free, accessible, and confidential support from a physician specializing in mental health seemed like the perfect solution to this problem.”

A more recent study published in the July 2017 issue of Academic Medicine found that 324 people died during residency from 2000 to 2014. The study found that neoplastic disease, or cancer, was the leading cause of death with suicide following second. Eighty residents died from cancer, while 66 died from suicide.

“This study showed that resident suicide rates were lower in the gender and age-matched general population overall from 2000 to 2014, but there was a temporal association with higher rates of death in early residency,” Patterson said. “This is possibly due to changes in how we approach residency training and the addition of support services.” “However, any physician suicide is a tragedy that is entirely preventable,” he said. “So, while this is a positive sign, we still have a lot of work to do. We lost 66 physicians in training during the time window of this study, and that is 66 too many.”
When Patterson finished his residency in psychiatry at the Mount Sinai Beth Israel Medical Center in New York in 2013, he saw a need for a program to help other physicians. Patterson had served as the chief resident and received The Albert Einstein College of Medicine Teaching Award for his efforts in medical education. “I recalled the amazing work of Dr. Julie Gentile and the tremendous commitment of the administration of the Boonshoft School of Medicine,” said Patterson, who returned to Dayton to speak about suicide prevention, resilience, and stress in medicine at a grand rounds event at Miami Valley Hospital. “Dr. Julie Gentile was the psychiatrist who provided confidential support to physiciansin training.”
Gentile is now professor and chair of the Department of Psychiatry at the Boonshoft School of Medicine. She is recognized for her work in intellectual/developmental disabilities and co- occurring mental illness and traumatic brain injury. She also is the project director for Ohio’s Coordinating Center of Excellence in Mental Illness/Intellectual Disability and project director of Ohio’s Telepsychiatry Project forIntellectual Disability.
Patterson went to the chair of his department at the time and asked if he could recreate the program that had been offered at the Boonshoft School of Medicine when he was a medical student. However, he did not feel that he would be experienced enough to treat house staff. He wanted to connect the physicians to more experienced faculty. “Much to my surprise, he thought it was a great idea and appointed me as the mental health coordinator for house staff,” said Patterson, who is a board-certified adult psychiatrist and an assistant professor at the Icahn School of Medicine. “It was important to me that people have a number they can call to get help directly.” So, he gave out his cell phone number and asked house staff and program directors to put it in their phones for them to have in case they or someone they worked with needed it. “Physicians in training at our hospital now had a direct line to a psychiatrist, and I started getting calls,” he said. “Our hospital administration has been in total support of the program, and it has expanded. We have other psychiatrists and psychologists who are accessible to staff, as well as primary care physicians, to expand the health care options for our staff.”
The physicians he has worked with often say that they know errors happen, but they should have caught the specific error in question. “Because people fear reprisal at their mistakes or are ashamed of them, there can be a tendency for people to not be transparent about errors or to discuss errors that happened to them,” Patterson said. “Thus, if few providers are talking about errors that involved them, then this makes it look like you are the only one having so many problems and leads to further isolation.”
Patterson said that the medical profession needs to change its perspective. “Even the best physicians will make mistakes, even horrible mistakes,” said Patterson, who is a fellow of the American Psychiatric Association. “Our job is to design systems that catch human error, because we have human beings at work in the system.” Beginning with medical students and medical residents, Patterson would like to see medical schools nationwide change medical education by implementing courses about physician resiliency like those offered at the Boonshoft School of Medicine. “We need to change our approach to medical education to focus on how we take errors that will happen and learn from them,” he said. “As physician leaders, we can help this process by openly talking about the errors that happened in our work and how they impacted us. We also should not engage in attacking physicians when errors happen. Rather, we should focus on how we can make safer systems.”
- Heather Maurer
Last edited on 01/31/2018.