The Boonshoft School of Medicine welcomed 111 new students during the Convocation and White Coat Ceremony last July, formally marking the start of their medical education.

During the ceremony, students took their first oath of professional medical ethics, concluding with the words, “I commit myself to a lifelong journey of learning how to cure, relieve, and comfort with humility and compassion.”

Each student received a white coat—a traditional symbol of the medical profession—personalized with his or her name and the medical school patch.

This is the third year that each student also received a stethoscope engraved with the words, “Excel in Leaving a Mark,” thanks to a generous donation from the Jason Madachy Foundation, Neal Barney, M.D., ’83, alumni, and friends. The foundation has given thousands of stethoscopes to medical students nationwide in honor of Jason Madachy, who died tragically in June 2007 just before he was about to start medical school at Marshall University.

From volunteering at homeless shelters to building houses for Habitat for Humanity, they have shown a strong commitment to community service both at home and abroad. Several have taken mission trips. Others have volunteered with prison outreach programs, Alzheimer’s patients, the Ronald McDonald House, children’s hospital playrooms, and animal shelters. Some have volunteered as emergency medical technicians.

Fifty-one percent are women, while 49 percent are men. Sixty-six percent speak more than one language, including Arabic, Chinese, French, German, Hindu, and Spanish. 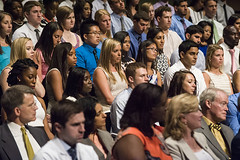 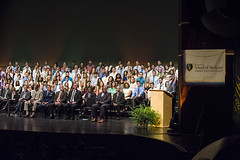 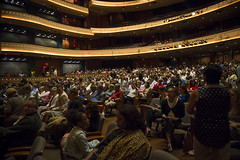 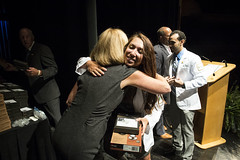